You are here: Home1 / ChangiLog2 / Competitive Racing3 / Regattas4 / Cruising to Sibu and Tinggi and onwards to the [email protected] Regatta 2018

It was going to be a long week sailing I thought to myself on the Thursday afternoon as we set sail from CSC. At Lima Channel, as the sun began to set , we decided it was time to settle down for the night.? We anchored ?Cicak? our Sprint Corsair trimaran just south of Tanjong Penawar at about 9pm and put up the tent. But at midnight, Mum and Dad thought that it was too rocky so we dropped the tent, pulled up the anchor, set the sails and sailed North through the night onto Jason?s bay. Lauren, Mummy and I did 1 hour watches on helm. We arrived at 5am, reset the anchor and went to sleep. 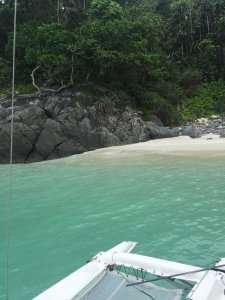 Cicak at the secret beach in Tinggi

From Jason?s bay, we sailed on up the coast to Pulau Sibu. The wind picked up and the sea got a bit rough with a lot of tall waves. When we arrived at Sibu, we felt relieved as we had bounced about quite a lot. As we landed a storm hit us and we had just enough time to set up our tent. As the rain splashed down on us, Lauren and I took the opportunity to wash ourselves. It was cold, but fun.

The next few days we went snorkeling in Sibu, went ashore for the occasional dinner and had movie nights on Cicak. On Sunday we said goodbye to Lauren and Mummy (they took a resort boat back from Sibu to Tanjong Lehman) as Lauren had to go back to school the following day. Dad and I then sailed on to the Northern side of Pulau Tinggi. We found a small bay with a beautiful white sand beach with no one there. Sadly there was a lot of rubbish above the high tide mark which spoiled the beauty of the place a bit. Dad and I went snorkelling and found an open cave. There was a school of fish inside and when we entered they all swam around frantically as they were scared of us. I was a bit worried as they were going super-fast. Some brushed against my skin and I could feel their smooth slimy skin.

On Monday after breakfast on the boat we sailed on to Pulau Besar to join the CSC fleet for the regatta. It took us around 1 and a half hours to get there. Dad and I alternated roles on the boat. I would helm then he would trim the sails and vice versa. ?After anchoring off the Aseania resort, we met up with the rest of the regatta and had a nice warm shower at our room. Ah, it was so nice to finally have a warm shower after tossing and turning on the waves. 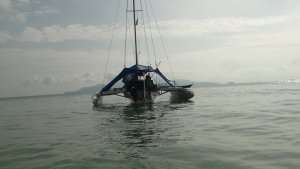 Cicak at anchor off Pulau Sibu with Tinggi in the background

Tuesday was day 1 of the regatta. Jakub Sharpe from ?Southern Light? joined us and helped with all parts of the sail trim, which was a big help as it started with strong winds. It was rather breezy and it felt nice as the water splashed on our faces which was really cooling. It was quite exciting but not as much as the next day. On Wednesday, we were sailing around ? when a storm began to build up behind us. As the storm built, so did the wind. We were speeding in the water and as I was on helm, I tried to make the boat go faster. We would go so fast but I would have to bear away as the sails would flap and the leeward ama would dive into the water. I ke

pt on doing this as we were going faster each time. The wind blew onto my hair, letting it flow behind me. We went as fast as 14.6 knots! That was my personal record and we were zooming past everyone. I could describe the experience in detail but it would never feel as exhilarating as it was there out in the water. I never felt more alive.

When we got back to shore, and the sun was setting, there was an amazing sunset. Picture this, the sun setting into the water. The sky has turned pink orange y 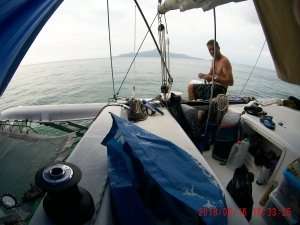 ellow all blended together in an amazing shade. It was such a spectacular sight I wish I could restart that day all over again. Once the sun was gone, the moon and stars rose. That was when I met Thea Haugan (sailing with her family on ?Southern Light?) and we immediately clicked and were chatting and laughing for the rest of the evening.

Thursday was a light wind day and it took us forever to sail past Pulau Besar. So Thea (who had joined our crew) and I started to sing songs that we knew to kept our spirits up. It felt like our singing was good because the breeze came back. The wind wasn?t that strong but it was enough to allow us to move while the others were left behind. We moved slowly, leaving our competitors behind. Helming once again, I steered us back to Besar and were one of the few who made it back within the time limit. This race took up a lot of my energy and I felt drained from head to toe. But that did not take my enthusiasm away. Once we reached the jetty, Thea and I decided to go jetty jumping. The first jump is always the worse as it doesn?t seem that high. At the same time, a rainbow formed and it was such a spectacular sight. 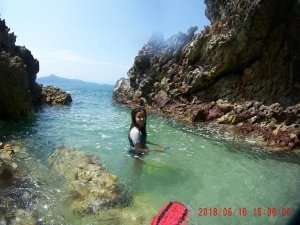 Soon it was time for the party so we got dressed and headed over to the bar. We had a massive barbecue with amazing food. It was so good that I had second helpings. I can still remember the smell of the smoke from the area where they were cooking the meat and seafood. After that we went to play a few games with the other kids from the regatta before walking along the beach. It was peaceful as Thea and I walked and talked. There was a soft breeze blowing at our face and the soft sound between our toes. With the sound of small waves crashing and the laughter and chatter of people, it felt like a perfect way to end another adventure.

The next day Dad and I woke up early preparing to set off while I traded numbers with Thea.? We said our goodbyes and left Besar. A part of me will always be in Besar and hopefully we will return again sometime in the future. We reached Singapore the following day after an overnight anchorage at Tanjong Siang and did immigration before meeting up with Mum and Lauren at CSC along with the other boats that had returned that day. Many thanks from all of Team Cicak to CSC and Aseania staff for putting on another brilliant [email protected] regatta. 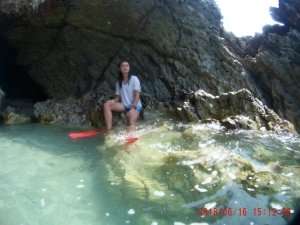 Sasha at the entrance to the secret cave in Pulau Sibu 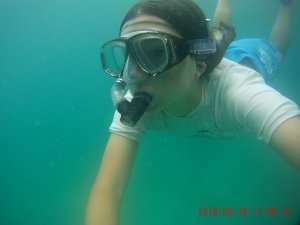 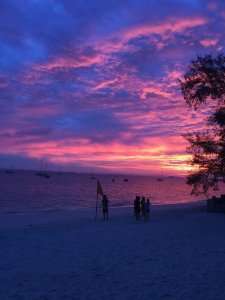 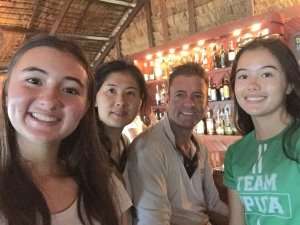 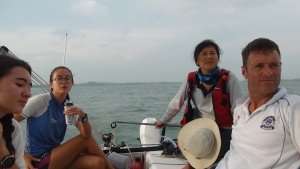 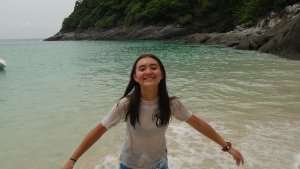 The author (Sasha) on the secret beach at Pulau Tinggi

Sasha Hill
Sasha is a pre-GCSE year student at United World College in Singapore where she keeps fit training with the school cross country team. She also helms, navigates and crews for her family's Sprint Corsair trimaran, Cicak at Changi Sailing Club and has cruised and raced extensively in the Johor Strait and River,South China Sea, Riau Archipelago and Andaman Sea. Her favourite sailing food on a long night passage is sausages.