You are here: Home1 / ChangiLog2 / News3 / My First Racing Experience at the Topper Worlds in Shenzhen, China

This year?s Topper Worlds was to be held in Longcheer Yacht Club, Shenzhen, China?the first time it was held outside of Europe. As Luc and I were the only 2 representatives from Singapore, I felt the pressure on me. We were supposed to take off for Hong Kong Airport at 6:45 in the morning on the 13 of August, but we only took off at 9:15am. We later learnt why: there was a typhoon brewing in Hong Kong. The flight was uneventful, and when we landed we found the organisers of the regatta waiting for us. Then there was a three hour car ride through the China-Hong Kong border to Longcheer Yacht Club. 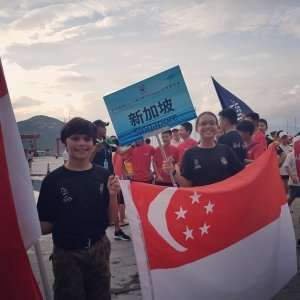 After settling down, we went to look for our boats. The search for our boats was a rather long ordeal, as a number of boats were still being unpacked and put together on registration day. We eventually found our allocated boats, which were on opposite ends of the boatyard. I had boat number 312 and Luc had boat number 361. There were two categories: The 5.3 (222 participants) and the 4.2 (45 participants). I was in the 5.3 while Luc was in the 4.2. After pulling Luc?s boat to a corner where all the small teams? boats were kept, we headed off to collect our sails. We checked our equipment; I was missing my mast and downhaul. Thankfully that was swiftly sorted by the helpful officials, setting us up for the final stage of registration – boat measurement.

At this point, the wind was very strong?20-25 knots??because of the growing typhoon south-west of us in Hong Kong. There was a typhoon warning?China?s version of a Category 1 Lightning Warning? for the day we arrived and the day after, preventing us from doing our practice race. Throughout the next 2 days of preparation, we grew accustomed to frequent and fleeting bouts of rain, coupled with extended periods of glassy waters.
The Opening Ceremony was held on the 15 of August, and there was a parade! It was a grand affair, with all the countries lined up in alphabetical order and China, as the host country, bringing up the rear. There were some speeches in Chinese which I only half understood, though I think that was already much better for most of the people there. We felt extremely proud to be Singapore?s Flag Bearers, making our entrance into the main hall for the Opening Ceremony. There was sumptuous dinner spread after, and the hall turned into a big scrum of people queueing for food.

The next day, it rained, again. After the competitor?s briefing, we waited for a while, then the 5.3 fleet set out. We sailed, no, paddled, rocked, and sculled just to get to our race course. Once we arrived at the race course, we waited. And waited. And waited for wind. We were arranged into fleets, and my fleet which was to start first was lucky enough to get in three starts. I say three because we started three times. Every time, they abandoned the race. In the end we did not even finish a race. The 4.2 class had better luck, securing 3 races on the same day. Luc faired very well for his 2nd competitive Regatta ever, finishing ahead of some more experienced competitors in his fleet! 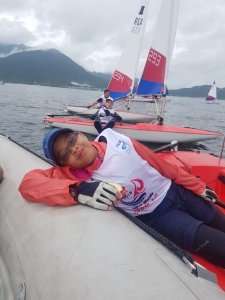 There were valuable takeaways from the subsequent days of racing, mainly:

Throughout the whole regatta, the one thing that we undoubtedly did the most was wait for wind. The reason why there was no wind was that the typhoon had swept the wind away. People always tell of the calm before the storm, but they never tell of the calm after the storm? Despite the poor conditions, Luc and I found some time to keep occupied by the beach, as the Vanhang Longcheer Team organised beach activities for the sailors on the last day of racing.
At the end of the regatta, the 5.3 fleet had only completed two races. During the closing ceremony, everyone received a participation medal (glass!) and the first person in the country for the overall standings in the 5.3 class got a glass trophy engraved with ?First in Country?. I would like to take this opportunity to thank my Parents, Vanhang Loncheer Yacht Club Officials, Race Officials, Luc and Coach Choy for the invaluable experience competing in a major international regatta! I learnt many different things, made new friends, and (mostly) enjoyed it! 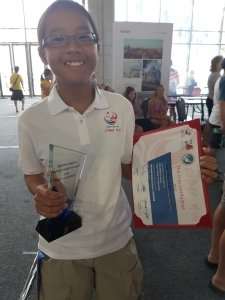 Angel Chew
Angel Chew is a member of our CSC Youth Squad. She is a home-schooler, which makes for more sailing time. She has been sailing for about a year, and is currently sailing in the Byte class. When not sailing, Angel loves to read and fix puzzles of any kind.