You are here: Home1 / ChangiLog2 / Cruising3 / Batam to starboard – Sailing up the Selat Durian : Expedition on...

Part 1 ? Head to wind ? the journey South to Ranoh from Nongsa by Lauren Hill (16)

Imagine you?re at the beach in Bali. Never been there? Let me describe it to you. The wind is blowing, strong, causing white caps to appear on the sea, like white harsh lines against the dark blue. Now imagine the waves. 3 metre tall monsters, ones that you could surf on that would take your surf board from a kilometre out all the way to the beach. Pretty right?

Now imagine sailing through that on a trimaran. Not so pretty. The waves kept coming and grew taller and stronger the further south we went. I remember thinking ?I wish I brought my boogie board to ride some of these waves?.?Then a big 3 metre monster came hit us and we nearly fell of it and I thought,??ok, maybe not?.

The whole sail down was a constant battle of waves and wind on the nose. We have a running joke in our family, and I?m sure it some sailors would agree with me. Wherever you sail in Singapore or its neighbouring ports/islands, the wind is?always?on the nose. Always. Oh, and the tide too.

We didn?t put the engine on. We knew sailing there would be faster. I doubt our little engine would?ve gotten us through Nongsa?s entrance.

We sailed 50 miles down south, battling wind, waves and tide. Then we hung a right after Kopek Rapat, the southernmost island after Keras Besar.

It was easier after that, the waves were beam on now, and as if by a miracle stroke of luck, so was the wind. We managed to escape the wrath of the sea into the sheltered waters of Pulau Ranoh.

There was lots of coral, and the reef extended far out from the main island, to where the main channel was, connecting Ranoh to the bigger islands around it.

Our first night anchorage at Pulau Mubudarat ? around the corner from where the Neptune Fleet normally stays on the return journey in the NE Monsoon

The resort on the island was a day resort, with small ferry boats bringing passengers from mainland Batam to the island in the early morning, and departing with the passengers in the late afternoon. There were glamping tents available on the island, as well as bunks for those who wanted to stay the night, but only a handful chose to remain each night. 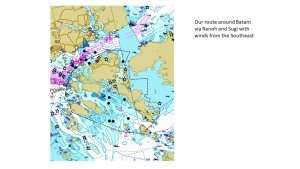 Later that day we were joined by other boats travelling down from Nongsa. Katrianne, Winddancer, Rehua and Sharkfin. We finished the day as guests of Gary and Karen Matthews for Sundowners with the rest of the fleet on Katrianne in the anchorage off Ranoh.

Part 2 ? Dining with the other boats at Pulau Ranoh by Sasha Hill (15)

?Cicak, Cicak, this is Windancer. Are the girls awake over? ?Hello Winddancer this is Cicak, no the girls are still sleeping over? ?Ah, we were wondering if the girls would like to come over to have pancakes for breakfast over?? ?PANCakes!? Lauren and I yelled, wide awake. Apparently our screams of delight carried through the VHF and woke up the rest of the fleet. The crew in Winddancer started laughing while Glenn told us that he would pick us up by dinghy. When we reached there I had at least 10 small pancakes covered with chocolate spread and honey. They were delicious. Thanks very much Barb! After that, we went on shore and joined the other boats in the flotilla from Nongsa for lunch. 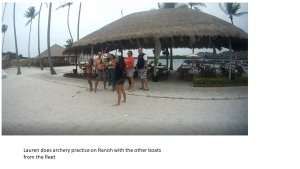 Part 3 ? Returning via the south west side of Batam, by Tim Hill (very old)

The rest of the fleet were planning to return via Tanjong Piayu ? with Winddancer going underneath the Barelam Bridge. We chose the route less travelled ? leaving Batam to starboard.

We set off just after sunrise sailing through the anchorage and waving goodbye to our friends on the other boats.

The girls did their usual 2 hours on, 4 hours off helming duties. We set out west and then rounded Pulau Abang Besar bringing out out big reacher sail (with a big Cicak on it, of course). We then settled down for a beautiful 30 nm reach out to Pulau Sugi and Telunas resort. For most of this passage we saw no other boats ? just the occasional island en route. As the wind picked up by mid morning we had the same swell as the trip down, but it was behind us so we could surf in on the waves. It was a great feeling and we averaged about 11-12 knots for the latter part of the passage.

Coming in close to Telunas we saw the resort up close. It looked great. Sasha spotted an unmarked rock off the Northwest side of Telunas and managed to avoid it. The route then took us out into the Durian Strait and then into the Philip Strait towards Singapore ? with 20 knots of wind behind us all the way.

We could have made it all the way back to Nongsa by sunset but decided to stop near Buffalo Rock on the Batam side where we found a perfect trimaran anchorage at Pulau Kapal Besar.? A sheltered flat water bay with sandy bottom, deserted island with a view in the far distance of Singapore island silhouetted by a beautiful tropical sunset.

We settled down for a last dinner and an early night ? with a big breakfast the next day ? and a 20nm reach to Nongsa arriving by lunchtime, around the same time as our friends from the rest of the fleet.

Lauren cooks us all breakfast on the final morning. We managed to position the cooker in the lower part of the table which worked well

The girls took a pool break while I tightened up all the fittings that had loosened through several days of extreme banging and shaking in some of the most extreme (and fun) conditions we had taken to the boat into.

The Southwest and West sides of Batam are a beautiful sailing ground with hundreds of hidden anchorages and protected sailing in either monsoon. We also couldn?t believe that we sailed through about 60nm in such a short time ? but I guess the 20knot winds behind us for most of the journey helped!

It was also great to spend part of the trip with friends on other boats down in Ranoh. Thanks Katrianne, Winddancer, Rehua and Sharkfin for joining and hosting us on your boats!

Thanks also to Ronny from CSC for correcting all my mistakes in the paperwork and arranging perfect delivery of forms in time for immigration as well as Prakash, Dwi and the team from Nongsa Point Marina for doing the same at the other end. And the girls from Cicak for making it all happen! A video of our adventure can be seen on the Cicak Youtube channel.

Footnote.? The provisioning and equipment stuff that worked well on this cruise

We were camping and cruising on the boat for 5 days. And although we have done longer cruises, we cooked most of our meals onboard and showered onboard. So what worked well for this extend cruise was

Small wooden foldable table. We were able to put the portable stove on the lower part of the table and use the top for everything else. This also meant the stove did not get any opportunities to melt the deck

2 x 20 litre jerry cans of water, plus an extra 4 litres frozen in reusable bottles in the cooler box and a shower bag of about 15 litres of water. We fill these up at the dock at CSC and load them onto the boat. We used about 6-8 litres a day showering for 3 of us and about 2 litres for drinking. We brought about 10 excess litres back to CSC. The shower bag split during this trip and will likely be replaced by old 2 litre plastic water drink bottles painted black with an alternative perforated lid for hand showers. We would dunk in seawater before lathering and then back in the sea before rinsing in freshwater.

Sarongs. Very useful as sun protection during the day, especially when lying on the net helming. We also used face and neck scarfs as well as hats and hence minimised suncream use.

Tinned food. Because we can?t keep stuff cold for longer than 2 days unless we replenish the ice ashore. So we had tinned beans, vegetables, sardines, tuna, spam ? you name it. These were either heated into a stew for dinner, fried (spam) for breakfast along with eggs, or eaten in wraps for lunch.

Fresh apples and peaches. Good for breakfast in the morning and don?t need chilling ? along with a pre-made bottle of cold ice coffee which also worked luke warm.

Sun screen tent cover for anchorages ? made from the material you get in garden centres that screens the sun but lets the wind blow through. It was very dry during this trip so we didn?t get out the big purpose-made tent that goes over the boom and seals the cockpit and cabin against storms at anchor.

Lauren Hill
Lauren is a GCSE-year student at the United World College in Singapore where she is a member of the school sailing team. She is also the skipper and tactician for her family's Sprint Corsair trimaran "Cicak" and has cruised and raced extensively in the Johor River area, Riau Islands, South China Sea and Andaman Sea.